About Our Guest, Terry D. Loftis 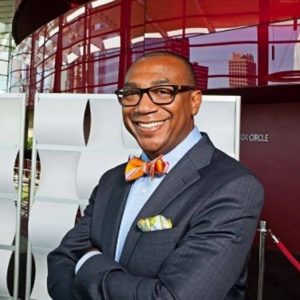 Terry D. Loftis, a Dallas native and graduate of the Booker T. Washington High School for the Visual and Performing Arts, received his first Tony nomination as a Broadway producer in 2015 for The Visit starring the legendary Chita Rivera. In 2017, he received his second Tony nomination as a producer for the musical Bandstand, which won the Tony for Best Choreography and Orchestration.

Prior to TACA, Loftis was Vice President of the Broadway Strategic Return Fund (BSRF) in New York where he oversaw all investor development for BSRF throughout the United States. BSRF was a co-producer of the hit Broadway Musical Hadestown, which won the Tony for Best Musical in 2019.

Loftis has spent the bulk of his career in advertising, serving as President of the Dallas-based firm Eisenberg And Associates. He has been actively engaged in the Dallas arts and non-profit community for over 20 years and serves on the board of directors for the Dallas Symphony Orchestra, Black Tie Dinner (Co-Chair), Dallas Arts District, as well as the President’s Council of the Advisory Board of Booker T. Washington High School for the Visual & Performing Arts. He has also served on the board of Resource Center, Resource Center Foundation, The Dallas Way, Friends of the Katy Trail, USA Film Festival and TITAS.

AIRTime is an artist interview series formerly held live on stage at the Alamo Drafthouse in Richardson, Texas. In Season 10 we shifted to provide a virtual experience via Facebook Live. Now, in Season 11 we are please to expand our offerings through our new YouTube Channel.

Missed an episode? Each and every AIRTime interview can be listened to at your leisure as a podcast on Apple Podcasts or in your favorite podcast player.